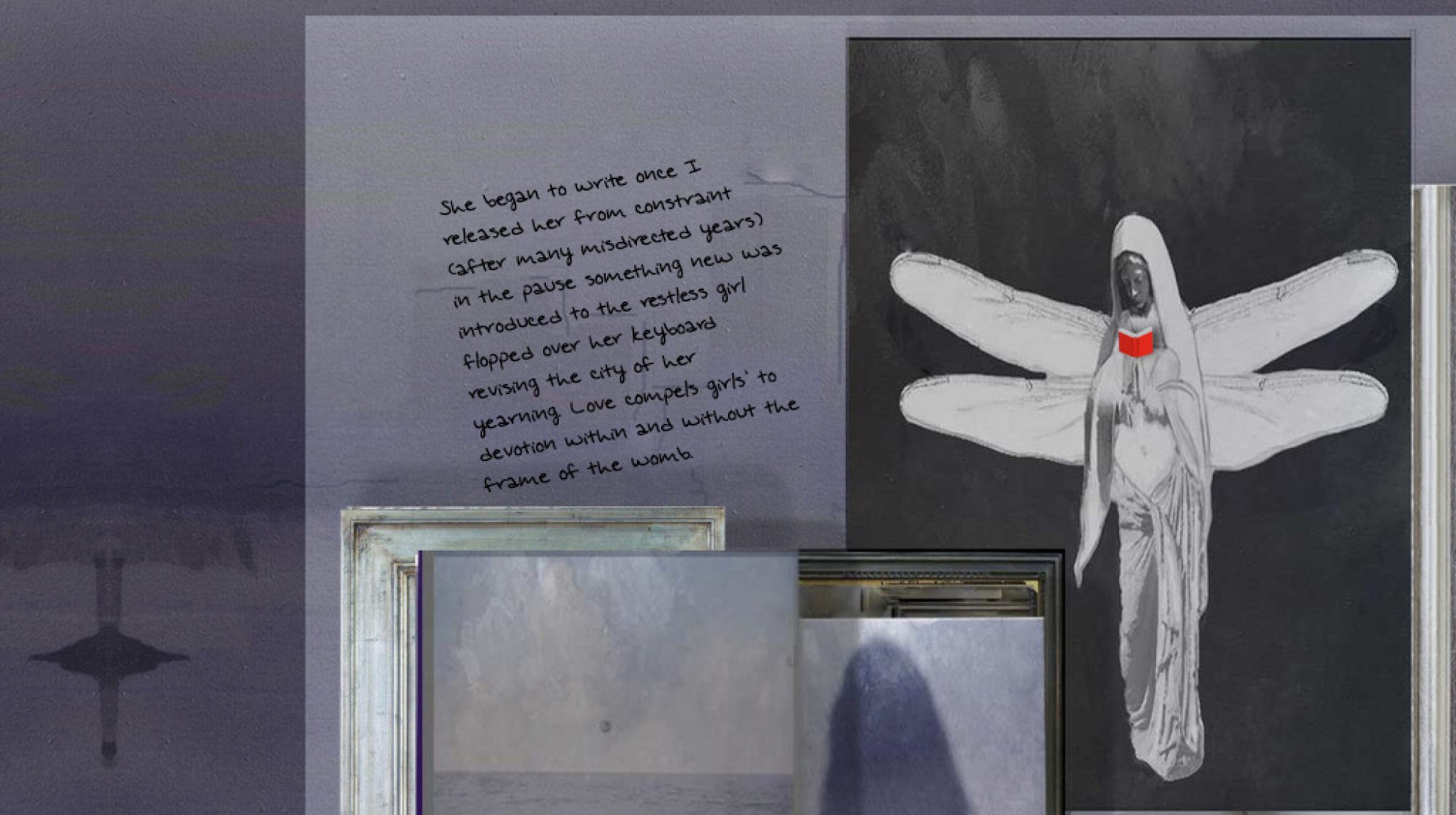 Janet and Louie kiss under the tenement-lined street. The sliver of daylight falls between the cellar doors onto the top steps. The metal rattles when someone passes on the sidewalk overhead. I kick a loose clump of cement with the toe of my saddle shoe. My mother keeps an eye on Janet while her mother is at work. I am sent with Janet wherever she goes, to the corner grocery, the candy store, not the cellar. Janet and Louie kiss in hidden places. Other girls sit in their boyfriends’ arms on the stoop; some make out leaning against parked cars. Louie presses Janet against a metal pole, his thin black moustache covering her pink mouth. I wait on the edge of their shadow, afraid of the dark and worrying what my mother will do when she finds out. I tell Janet we have to go. Her voice sticks in her love-soaked throat. Janet and Louie kiss. Strange odors seep through the timber where a bodega has taken Chigimara’s spot. Green bananas and rice sit in the windows that used to be stacked with macaroni in blue boxes and cheeses hanging from string.

Janet and Louie do not speak in rhyme. She does not whisper poems to him from her fire escape. Janet and Louie kiss in the dark with cloth tongues, scuffling feet, shushing and the scurry of rodent claws. Sister Mary Francis has told my third grade class that kissing is a sin. She said God blocks the light from reaching the fiery pit of hell where sinners are damned for eternity. I can imagine heaven and hell but not eternity. Janet and Louie kiss goodbye. Janet grabs my hand, holds on tight as we stumble up the wooden stairs and go out through the door in the back of the hall. After she brushes cellar dirt from my navy blue uniform, she tucks her blouse into her skirt. Her hands shake and her voice cracks. I cross my heart and swear not to tell. Janet fears what will happen if I do.

Our mothers are neighbors. Janet’s mother comes home to her only child smelling of cigarette smoke and liquor. My mother does not drink, but she lives with her boyfriend. My two brothers and I cross Second Avenue to see our father. He works two jobs to pay for child support. My mother’s apartment is on the top floor of a six-story walk up. She moved up a flight after she told my father to leave. Janet lives with her mother in the apartment at the far end of the hall. The steps next to our apartment lead to the roof. The metal door, always open a crack, is on the last landing that smells ashy, is out of bounds, and forgotten. The roofing glistens like black sand in the hot sun that melts the crooked tarred seams. My mother and I found a bottle cap and needle on the landing. She told me if I ever take dope she would beat the hell out of me.

Our apartment is in an alcove between two other doors. Thick coats of paint smooth the beveled edges on the three panels. The banister’s dull sheen is tacky where dripped paint has hardened into beads. The hallway walls are queasy green. My stomach hurts on school days. The nuns damn me for my sins. They tell me the devil can disguise himself as Jesus. If I trust him he will lead me into temptation. Louie has olive skin and he looks nothing like the Jesus or the devil. Yet, he tempted Janet into sin. My mother pumps me for information on how this happened.

Where did you see Janet and Louis kiss?

On a park bench on the East River Drive under a scrawny tree.

In the dark cellar under Louie’s building.

What did you see?

I saw them kiss.

Are you telling the truth?

What happens to girls that lie?

They live in eternal damnation.

I cannot explain to her how kissing put a baby in Janet’s belly. My mother’s shouting and my crying bounce off the hallway tiles, out the window, and down the six flights of stairs. The yelling begins again when Janet’s mother gets home. My mother hits me, not for the first time—it is her only defense. She tells me never to bring her home a surprise package. I remember how scared she got when our cat brought home a mouse and dropped it at her feet. I can still smell of damp concrete next Saturday when I go to confession. Father Julian tells me to say ten Hail Marys and five Our Fathers for lying to my mother while I kept Janet’s secret. My penance wipes away my venial sins. Janet’s surprise package will need baptism to wash away its mother’s sin.

Kiss, kiss, kiss, kiss like the white stripe of paper curling from a chocolate Hershey. Janet and Louie kissed; a baby is on the way. Janet’s white fifty/fifty poly cotton blouse pulls and gapes at the buttons. Afternoons spent in the dank cellar have fattened her thin body. Janet’s mother wipes the floor with her trying to get rid of the baby growing inside her bellyful of kisses. Janet wants to jump off a bridge even though she knows there are no bridges on hundred and nineteenth street. The East River lumbers by the metal railing embedded in concrete. Dry grass breaks through the cracks in the ground around green splintered park benches where Janet and Louie kissed under the scrawny tree. She does not climb over the railing to jump into the green currents. She does not walk up the flight of stairs past the syringe and cap to jump off the ledge around the tar beach. She does not go under a butcher’s knife. Janet waits. She waits at the top of the staircase for her mother to reach the last landing. Her mother calls Louie a Spic and curses him for knocking up her daughter. Janet watches her mother rest her heavy body against the wood frame of the large window. There is one window on each landing overlooking the courtyard. The dishcloths Janet put out to dry after another meal alone hang limp from splintering clothespins. Janet leans her fetus half way out the window to watch the clothespin she dropped land on shredded brown grocery bags. Her mother stumbles up the five remaining marble steps with worn edges translucent as the plastic mother of pearl pin on her housedress. Greasy clumps of black hair stick to her swollen face. Janet waits a long time for her mother to reach the top step.

Janet serves her mother a pork chop with cold spaghetti. She braces for the slaps that comes when inside her mother’s reach. I close my eyes until the dull crack fades. I hear her yelp as if the blow was to her stomach. She drops the plate and grabs her belly. Shards, sauce, chop, tangled in spaghetti streamers crash on the floor. Her mother’s hands on top of her own move around Janet’s round belly as if spelling out the answer. I run across the hall screaming to my mother for the help I think Janet needs. She is half way down the long foyer in our apartment when I burst through the door. She turns me around pushing me ahead of her. I hear her count off the months since Janet’s belly bloomed in last May’s sunshine. All through June, July, and August I overheard my mother, her friends, Janet, and her mother talk about what to do. September comes in through the open window on the landing it still feels like summer even though school has begun. My mother tells me the baby isn’t due for another two months. Janet says she felt a kick.

Kicked and battered inside and out Janet walked down the aisle. A bouquet of white carnations covered her bellyful of kisses nailed to her small body like the crucifix over her mother’s bed. No father gave the bride away. Her only memory buried long ago among the? the scraping of a metal bedframe dragged over marble, tiles grayed with age, useless against fate.